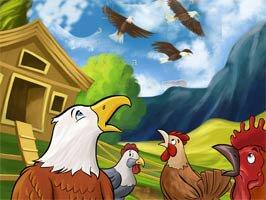 A baby eagle once fell out if his nest and landed with a bunch of chickens. He lived with the chickens for several years thinking he was a chicken. One day he looked up and saw an eagle flying in the clouds and admired how great it would be to soar so high. He thought of all the opportunities the eagle had over him as a chicken and longed for the day he could fly.

Several months went by and another eagle saw him and came down to talk with him. He asked him why he was living with a bunch of chickens. The response was simple, “I am a chicken and cannot fly, but thanks for the encouragement.” The other eagle told him that he was not a chicken. He showed him that they were identical and how completely different he was from a chicken. After much discussion he realized that he was an eagle and he COULD fly. He was not meant to spend his whole life grounded, he was meant to fly. Once he started to flap his wings he did fly—he soared with the other eagles.

I believe many athletes are like that eagle that landed amongst the chickens. They play sports for the physical fitness, social opportunities and even competitive opportunities these games provide. However, spiritual growth from sports is seldom sought out or even desired by most new players. I see this specifically in tennis. The game is not being used to the fullest of its potential; in fact I would say it is not even at 50% of its ability. Tennis can cultivate so much for an athlete spiritually, yet hardly ever do athletes participate with this expectation in mind.

Tennis is more than a game—it is life. When tennis is viewed in this way it will be much more fulfilling and greater expectations will be created for the players. Tennis should do so much more than help players achieve better fitness, enable social opportunities and create competition. Tennis can make you better in most all areas of life; yet this is seldom understood.

Tennis is seldom used in this way. Compare this to the sport of running. People usually start to run with the anticipation of the health benefits the sport provides. Runners are enticed to participate most often for what the sport can do for them more than for the social or the competitive benefits it provides. Runners are enticed to run because of all the sport can do for their health, mentally and physically.

Tennis is often the opposite; players usually start because of social or competitive opportunities the sport provides. However, the far greater spiritual advantages that can be developed are missed. If players fully understood all the spiritual growth that can occur on the tennis court, a whole new wave of players could be created because of the health benefits, mental and physical, inherent in the game.

I believe the spiritual benefits of tennis (mental and emotional) far outweigh the physical benefits of running, yet these are seldom promoted in the game. Growth in these spiritual areas will bring greater enjoyment of the game and make the participants better players. Some of the fruit that will be harvested when players understand and play tennis this way will be in the form of learning key processes compared to focusing only on outcomes.

Modern sports need to educate athletes on the spiritual benefits inherent in the games. Therefore how and why athletes compete is critical. Sports were created to help eagles soar higher and higher. The problem is modern sports cater to chickens who cannot fly and don’t want to fly either.