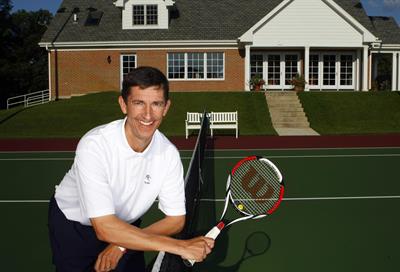 Last week I talked about two separate ways that players compete in sports; I called them "Two Kingdoms." The first kingdom is playing to “be your very best in the match”; the second kingdom is focused “only on winning.” I would like to continue this thought by talking about the kings who rule these two different kingdoms.

The first king, whose kingdom is grounded by spiritual rule and has the highest moral standards in all that he dictates, we will call "King Sportsmanship". The second king, whose kingdom is grounded by worldly rule and has winning as its only standard, we will call "King Fame". These two Kings rule with different methods, attitudes and ways of proclaiming victory. They reign over mutually exclusive empires and allegiance to one is rebellion to the other and vice versa.

Let’s contrast these two kingdoms a bit further. King Sportsmanship has an internal kingdom. It is the culmination of the spiritual processes going on inside of us that are then carried out in our physical actions. This is seen in how we think, how we control our emotions, how we deal with adversity and so on. The way we must respond in this kingdom is by virtue each and every time. Any hint of vice will be seen as rebellion.

The commands of King Sportsmanship are black and white. The ethics of his rule are predetermined and are not pliable. In no way will any type of cheating, intimidation, or gamesmanship be tolerated. He also demands that all your thoughts, words and actions are under his sovereign moral control. There is no middle ground.

The way his subjects serve him is by obeying his commands; they leave the results up to providence. He does not desire more wealth; rather he demands to have your heart. Your obedience to his every command shows your love and submission to him. His subjects serve him because they love him. He treats them very well because he is a just and good king. His people look out for each other because their king lives this way and demands this of them. The stronger ones support the weaker ones as best as they can.

On the other hand, King Fame rules a worldly kingdom and all he cares about are results. He wants to win at all costs; all he cares about is victory. This means there are no rules to follow; just do whatever it takes to win. This means that everything is grey and you can do whatever you like. Cheating, intimidation and gamesmanship will go a long way and can be used as often as you like.

Since his empire is material you can see it and it is easy to spot. Whoever wins the last point brings him the spoils of war and will be rewarded with a promotion. You will easily spot his subjects because they will do anything to win; there are “no holds barred.” The more you win, the greater your rank in his kingdom. The more you lose the lower your rank.

His subjects serve him out of fear. He is a cruel master because you are only as good as your last match. If it was a loss he calls you insubordinate and demands better next time. No matter how much you have given him he wants more from you and is never satisfied. Your loyalty to him is seen only in your dominance over others. He treats his victors very well, but the dungeons house the losers.

Many of his subjects seek to take his throne. Therefore everyone must fend for himself. In fact new kings come and go because there is much insurrection in the kingdom. Since there is much separation between the weak and the strong, the weak despise the strong because they lord it over them.